Yoors is born in Antwerp on April 18th. His father, Eugeen, is a famed stained glass-artist, known for reviving the art of stained-glass in Belgium—he is also a talented engraver and painter, having studied painting in Paris under Gustav Moreau. His mother, Magda, is an early human rights activist. Both Madga and Eugueen are pacifists with a strong catholic faith.  With four languages spoken at home, Yoors grows up a polyglot speaking Spanish with his father, French with his mother, German with exchange students who help out in the house, and Flemish at school.

At the age of twelve Yoors first encounters a kumpania of Rom on the outskirts of Antwerp. Upon initially wandering into their camp one night, he goes on to stay with them, only returning to his family intermittently during the winter months, until leaving the Rom in 1939. Upon becoming friends with Putzina and his father Pulika, the Rom adopted Yoors into their community, a rare occurrence for a Gajo or non-Rom.

Yoors splits his time between the Rom and his parents’ home in Antwerp and later in Purley, on the outskirts of London.

Yoors learns the Rom traditions and language and often discusses his trouble at moving between two distinctly separated worlds.  While his parents did not encourage this lifestyle, they gave their approval and aided him at avoiding detection from authorities while at school and during his travels.  He often had to travel long distances to find his Rom family, crossing borders and travelling through many countries.

In 1939 Pulika sets up a marriage for Yoors within a Rom girl, an action that would cement his ties to them and make it difficult to return to his Gajo life.  Yoors decides that he needs to leave the Rom as the conflict of dual loyalties would undoubtedly return.

Yoors is asked to coordinate efforts with the Rom during the war. Working for the Resistance and Allied Intelligence they are able to train intelligence officers because of the Rom tradition of living on the edge of society and in a highly secretive manner, obtaining false papers in manners the Resistance couldn’t.

On his way to the United Kingdom, Yoors is recruited by the French Resistance to co-opt the Rom, smuggling food and arms into Belgium, France, and Holland.

Yoors is arrested by the Gestapo and sentenced to death.  After confinement and six months of torture at La Santé prison in Paris, he works for the allies again, impersonating an SS officer and escorting allied soldiers from behind enemy lines, however he is caught and held at the Miranda del Ebro concentration camp in Spain until 1944. During this time he writes numerous letters to his friends and family explaining his wishes to return home, start a family, and to involve himself fully in making art.

Yoors is released from Mirando del Ebro concentration camp, and joins Belgian forces in the UK.

Yoors studies international law at the School of African and Oriental Studies, London University. He is also interested in researching the roots of the Rom language, which he believes to be based in Sanskrit.

Yoors marries Annebert with whom he has corresponded since age 11 and the two move to London. There they set up a studio at 27 Holland Park avenue W 11.

During this time Yoors begins sculpting and becomes fascinated by weaving after seeing an exhibition of medieval and Renaissance tapestries in London. He teaches himself and Annebert to weave.

Yoors is also a regular contributor to the Gypsy Lore Society’s journal in London.

The first of the large tapestries, Nadara (1948), depicting a simply rendered medieval knight astride a rearing horse, is woven.

The Archer Gallery in London organizes the first exhibition of Yoors’s tapestries.

Yoors is included in the “Eighth Annual Exhibition of Catholic Art” from January 19th to February 5th at the Royal Institute of British Architects. The tapestry The Miraculous Draught of

Travels to New York for what was meant to be a six-week stay–his visa indicates he is traveling as a journalist.

Upon deciding to stay in New York, Yoors sets up studio with a 15-foot vertical loom, this being the first independent tapestry studio in the US.

Galerie Stop-War in Brussels organizes an exhibition from December 23rd to January 12th. Both tapestries and gouaches depicting biblical scenes are included.

Marianne and Annebert join him in New York.

They live and work at their studio at 96 Fifth Avenue, where they live until 1959.

Under the auspices of the Belgian Government, the International School of Art in New York’s Greenwich Village organizes Yoors’s first exhibition of tapestries in the US, which was highlighted by the New York Times.

Manhattanville College of the Sacred Heart mounts an exhibition of tapestries and paintings from February 8th to 25th in the Art Gallery of Brownson. ncluded are the oil painting and full-scale cartoon of Fisherman for which the tapestry is still being woven, the tapestries Descent from The Cross (1953) , Acocalypse (1955) , Cock Fight (1955), The Knight of Nadara (1948), and the oil paintings Midday Heat, Girl with Rooster, Girls at The Fountain, Judith, Combat, Vendora de Jugos, The Bathers, Luluja, Tamazunchali, and Death of the Unicorn.

The Montclair Art Museum in New Jersey organizes an exhibition of tapestries.

A group of tapestries are shown in a solo-exhibition at the Museum of Contemporary Craft in New York.  The exhibition travels to the Reception Center of the Time-Life building in 1958.

Yoors receives a Pentax K1000 camera as a gift from two photographer-couples: John and Bini Moss, and Marc and Evelyne Bernheim. It is during this time that he truly begins to explore the medium of photography in the streets of New York City.

Dallas university Museum, Dallas Texas March 25th to May 25th “ Religious Art of The Western World”, included is the fisherman tapestry. At a party in celebration of the show, and hosted by Jane Owen, a prominent collector and socialite, Yoors meets photographer Henri Cartier-Bresson, who he exclaims in a letter to his parents as being “perhaps the greatest photographer in the world”

The Yoors family movies to a studio at 329 East 47th Street.

Art in America magazine lists Yoors as a new talent

Several tapestries are included in an exhibition titled “The Arts of Belgium: 1920-1960”, from June 29th to August 5th, at the Park-Bernet Galleries in New York. The exhibition covers painting, ceramics, sculpture, and the applied art, and includes work by masters such as Magritte, Gaston Bertrand, Paul Del Vaux, and Michel Martens. A catalogue is published, in which Yoors’s Horsemen of the Apocalypse tapestry is reproduced. Other tapestries included in the show are Forest, Primeval Night, and Roots.

Yoors is included in an educational film called “The Revival of Tapestry from 1911”. Other artists include: Braque Jules Cheret, Pierre Bracquemond, Raoul Dufiy, Jean Lurcat, Sven Erixon, and Eric Tayor, among others.

The tapestry Roots is included in an exhibition entitled “Liturgical Art” at the Arts Club of Chicago from January 22nd to March 1st.

The National Design Center organizes an exhibition called “Architectural Tapestries” which runs through January 15th .  On March 15th, following this exhibition, a private showing of the Yoors studio was organized by Virgina Frankel.

Yoors is invited by Belgian filmmaker Henry Storck and anthropologist and filmmaker Luc de Heusch to travel through Europe, the Balkans, and Turkey from August 3rd to September 9th on a scouting trip for a documentary on the Rom which never made it to production. The photographs that Yoors took on the trip are shown at the museum of Natural History from March 19th to September 1986.

The Otis Art Institute in Los Angeles organizes the exhibition “Contemporary Tapestries” from April 27th to June 11th 1961. The tapestry “Stampede” is included. A party in honor of Octavio Paz is thrown by Jan Yoors and Ernst Van Leyden at the Studio. Pacem in Terris Library resents the exhibition of Yoors’s work from January 23rd to February 20th

“Ruckus”, a party featuring Dizzy Gillespie is organized at the Studio on March 26th, 1962 to benefit CORE (Congress for Racial Equality).

The tapestry commissioned for the Shepherd of the Hills Lutheran Church in Minnesota is completed The work, which still hangs behind the altar, depicts a line of gray sheep against a red background.

Yoors is selected as the US representative at the International Biennial of Contemporary Tapestries in Lausanne, Switzerland.

Along with French filmmaker Pierre-Dominique Gaisseau, Yoors participates makes the film Only One New York. The movie debuts in 1963 and the book, which features photographs by Yoors, is published in 1965. A series of articles and interviews about the film appeared in newspapers and the film was very well received.

Yoors travels throughout South America, the Far East, the Middle East and Russia photographing postwar religious architecture, commissioned by the American Institute of Architects  (AIA) for the 1967 International Congress on Religion, Architecture and the Visual Arts, the opening reception was held at MoMA. Buckminster Fuller hosted the dinner, and Barnet Newman spoke.

During this trip Yoors also has time to take personal photographs and to explore villages and sites not included on the itinerary. The reception The Chicago Arts Club mounts and exhibition of abstract tapestries November 11th to December 10th, 1966. Included are Blue and Black, Fallout, Purple, Wave Dragon II, Forest Fire, Serpent, The Bat, and Animal.

In 1967 The University of Texas Art Museum, Austin, Texas organizes and exhibition of tapestries and photographs with abstract painter Kenzo Okada’s recent work, from January 8th to February 26th.

The Gypsies is published by Simon and Schuster. Margaret Mead reviews the book in the September issue of Redbook magazine.

Yoors travels and did research for a documentary on the Gypsies from Northern India through to the US, though it was never finished.

The Yoors family moves from 47th Street to 108 Waverly place in Greenwich Village in 1967.

Gypsies is translated into French

The exhibition “Contemporary European Tapestries” from the collection of Mr. and Mrs. J.L. Hurschler is organized at the Society of the Four Arts in Palm Beach, Florida, in January. The show includes Yoors’s Bat.

Gypsies is translated into German

Yoors Travels to Spain to research for his book “The Gypsies of Spain.” Publishes by MacMillan
Crossing: A Journal of Survival and Resistance in World War II is published by Simon and Schuster.

Gypsies is translated into Polish.

Members of his extended Rom clan came for a three-month visit in 1974, taking over an entire hotel by Coney Island.

The Gypsies of Spain is published.

Yoors returned to Belgium a final time for a retrospective of his work in Gent, which ran from February 22nd to March 31st in Saint Peters Abbey.

Yoors dies of a heart attack after a long struggle with Diabetes at the age of 55 on Thanksgiving Day. 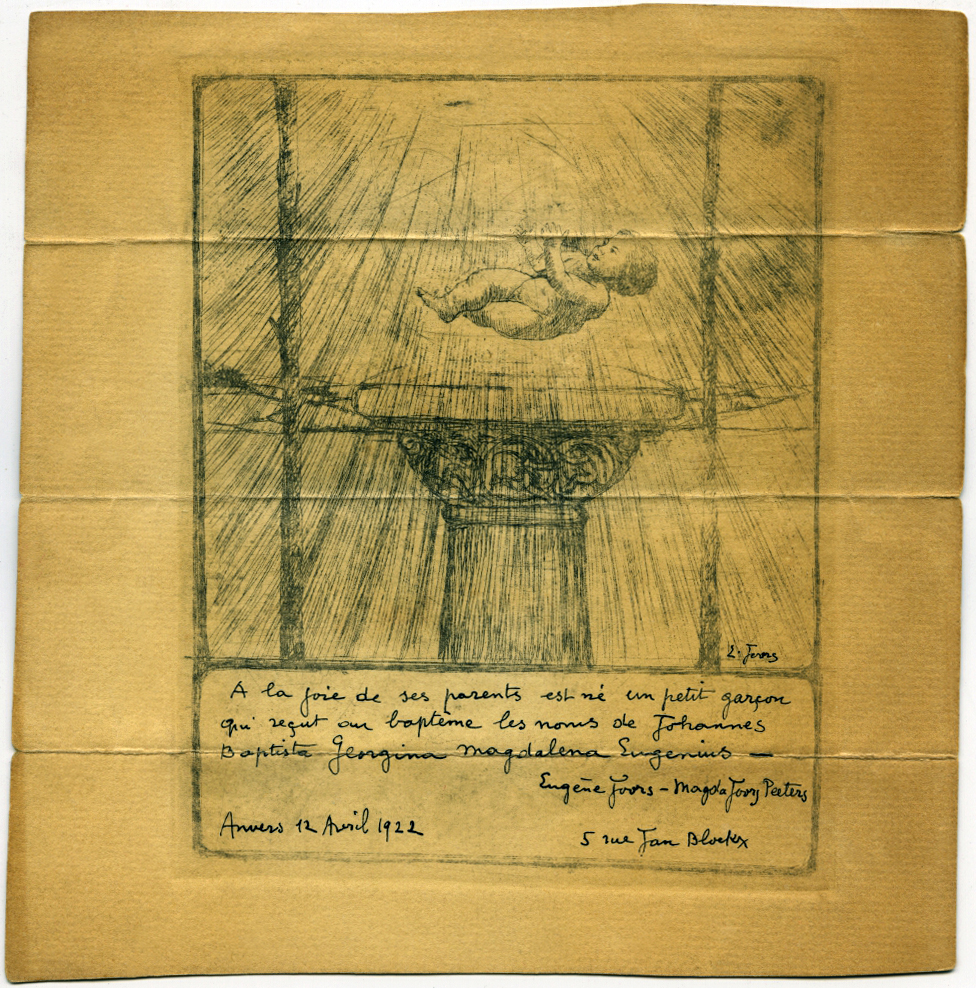 1922. Birth announcement for Jan. Etching was creating by Eugene Yoors 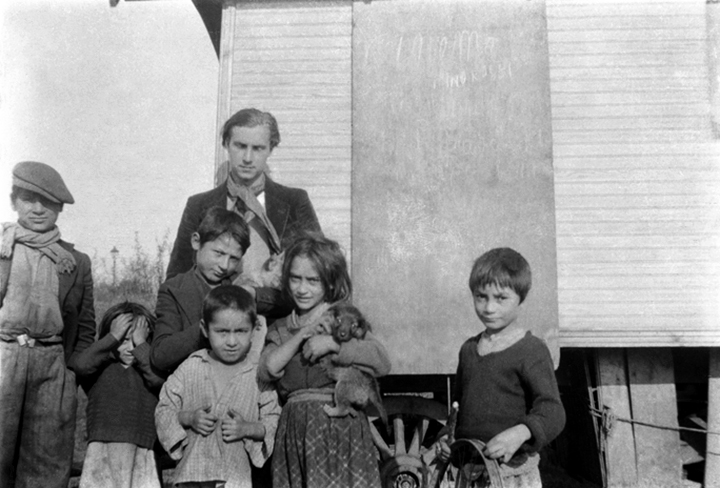 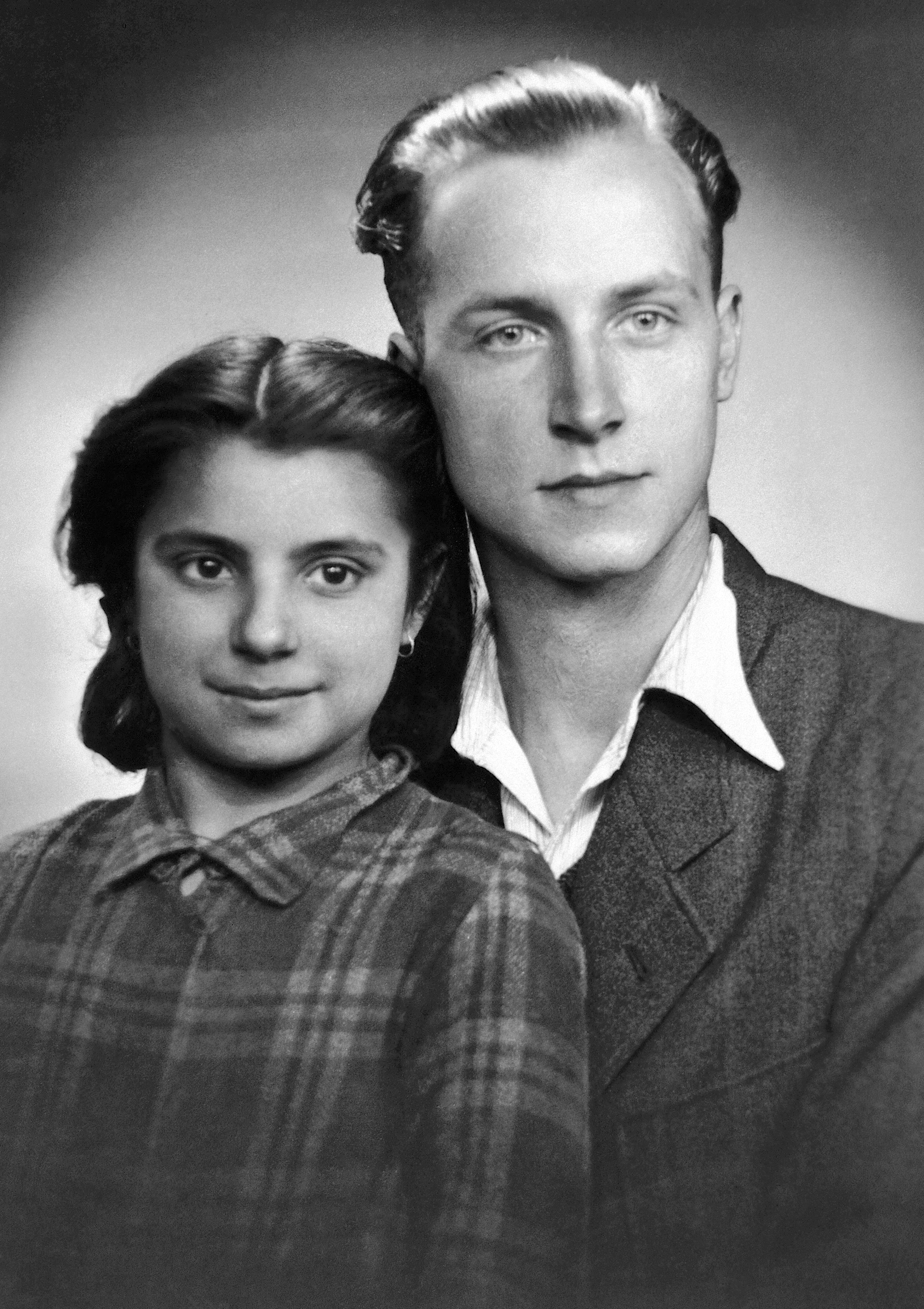 1939. Jan photographed with his bride to be 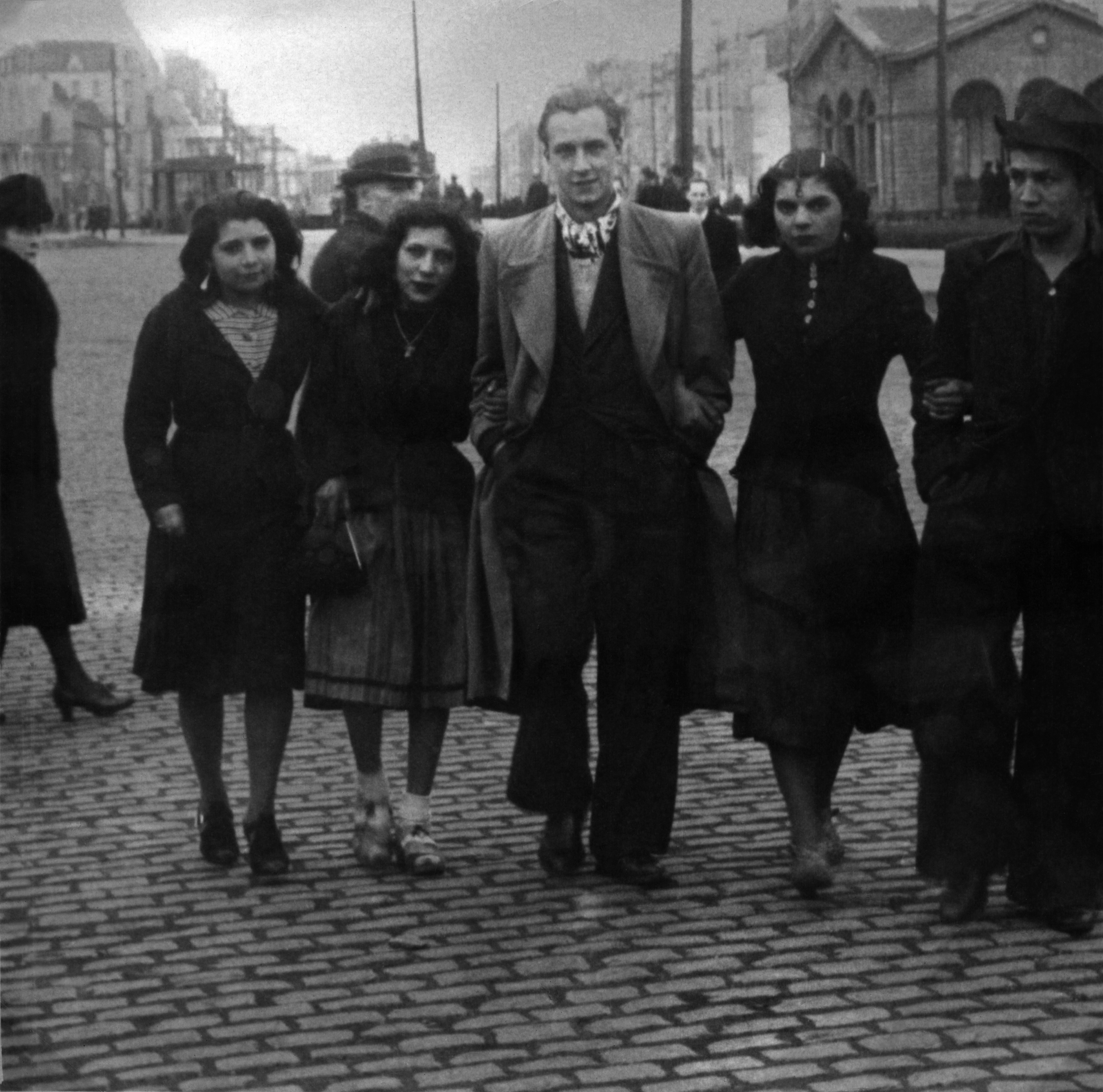 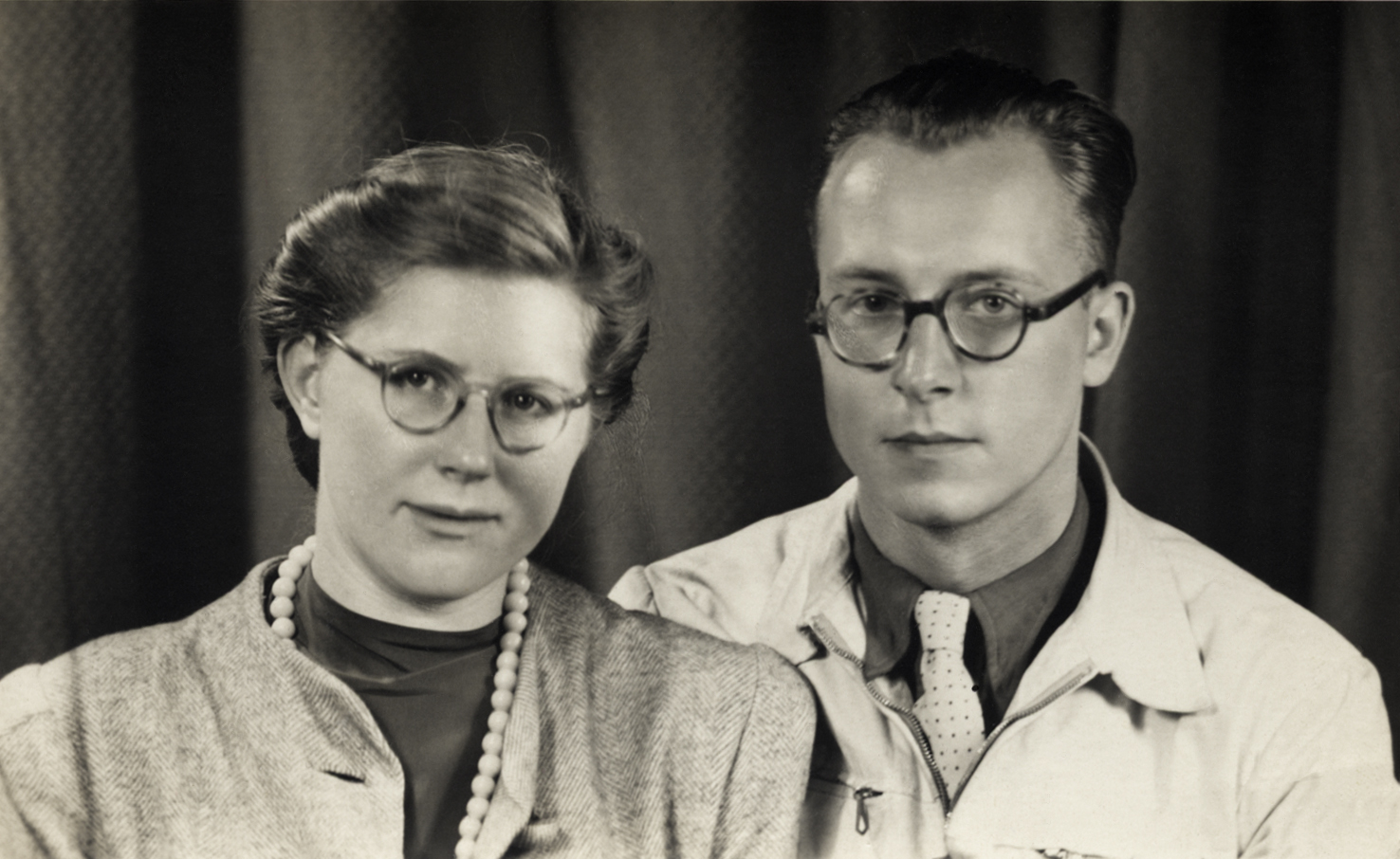 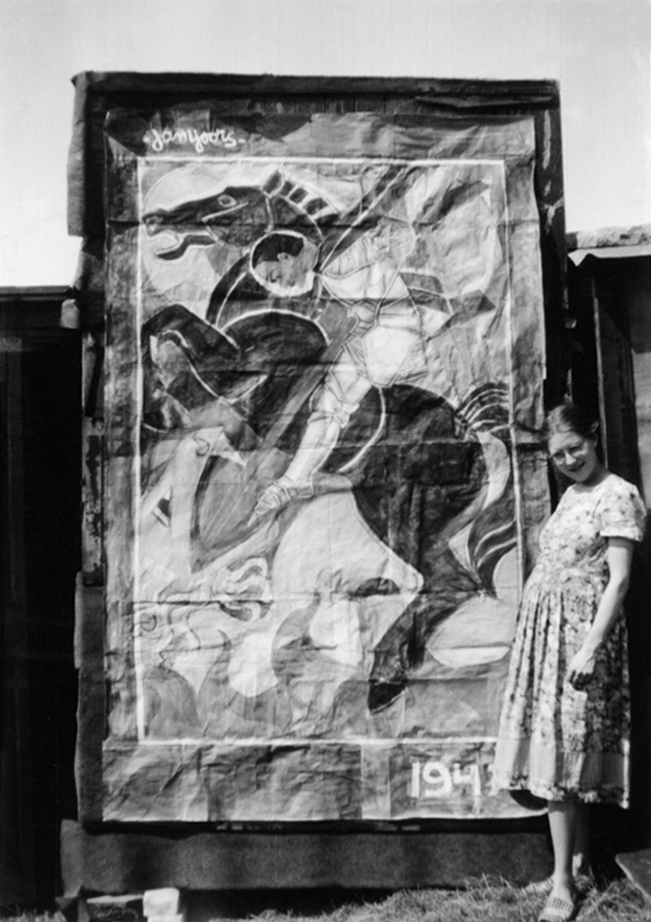 1947. Annabert standing next to the Nadara cartoon before it was woven 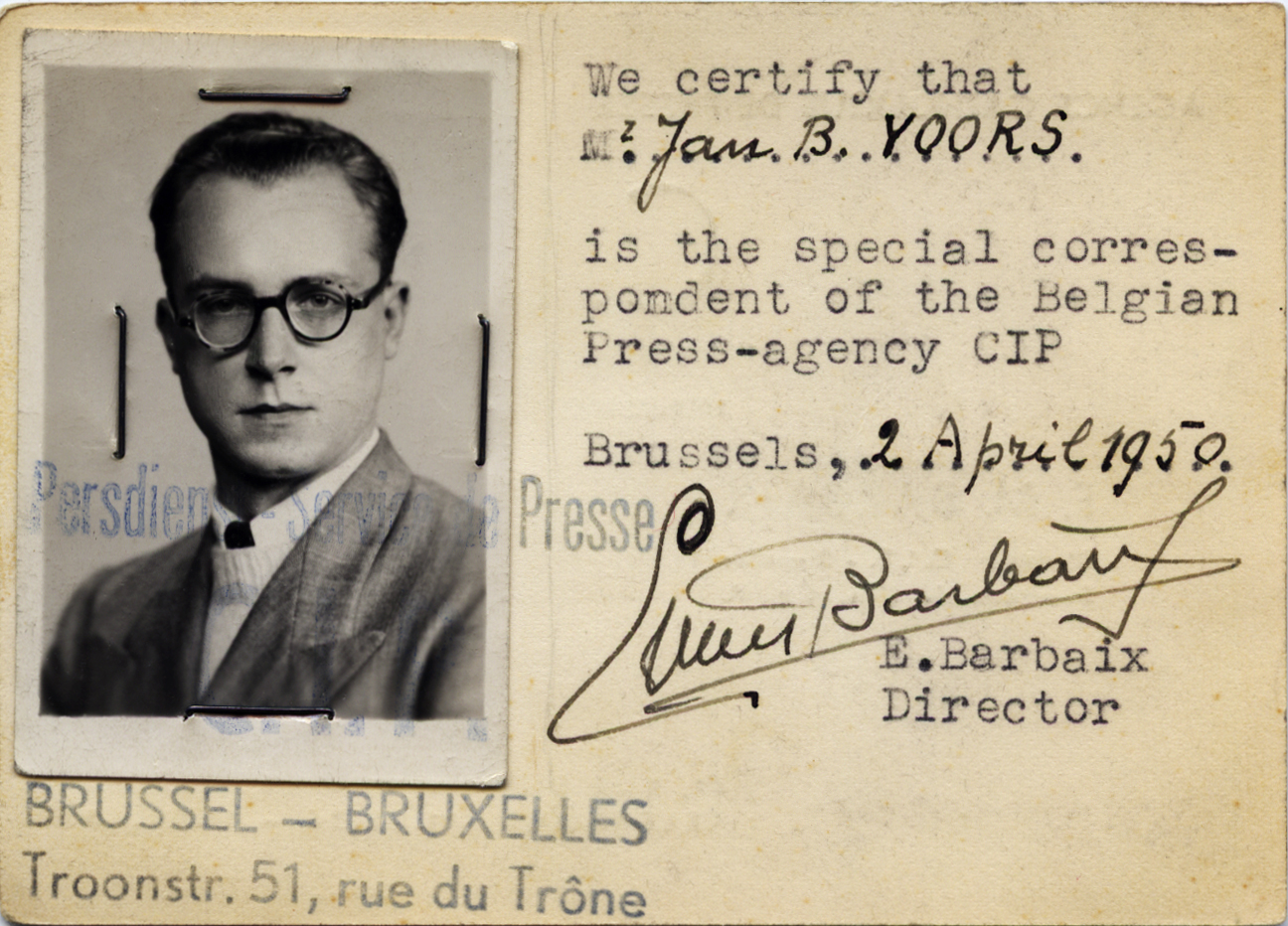 1950. Jan comes to America as a journalist on his press pass 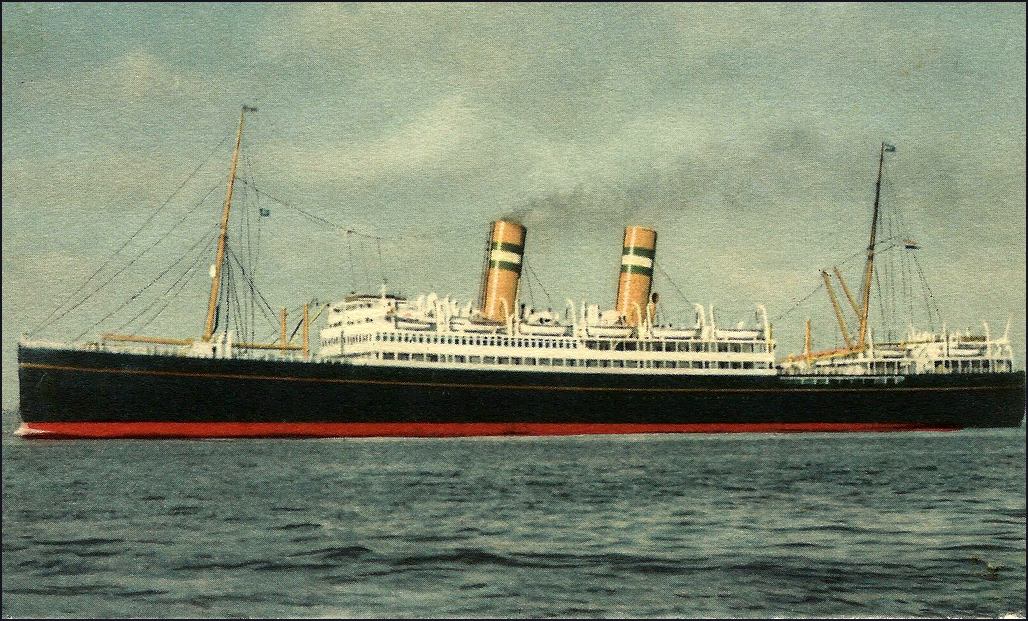 1951. The S.S. Veendam, the ship that Marianne and Annabert traveled on to America 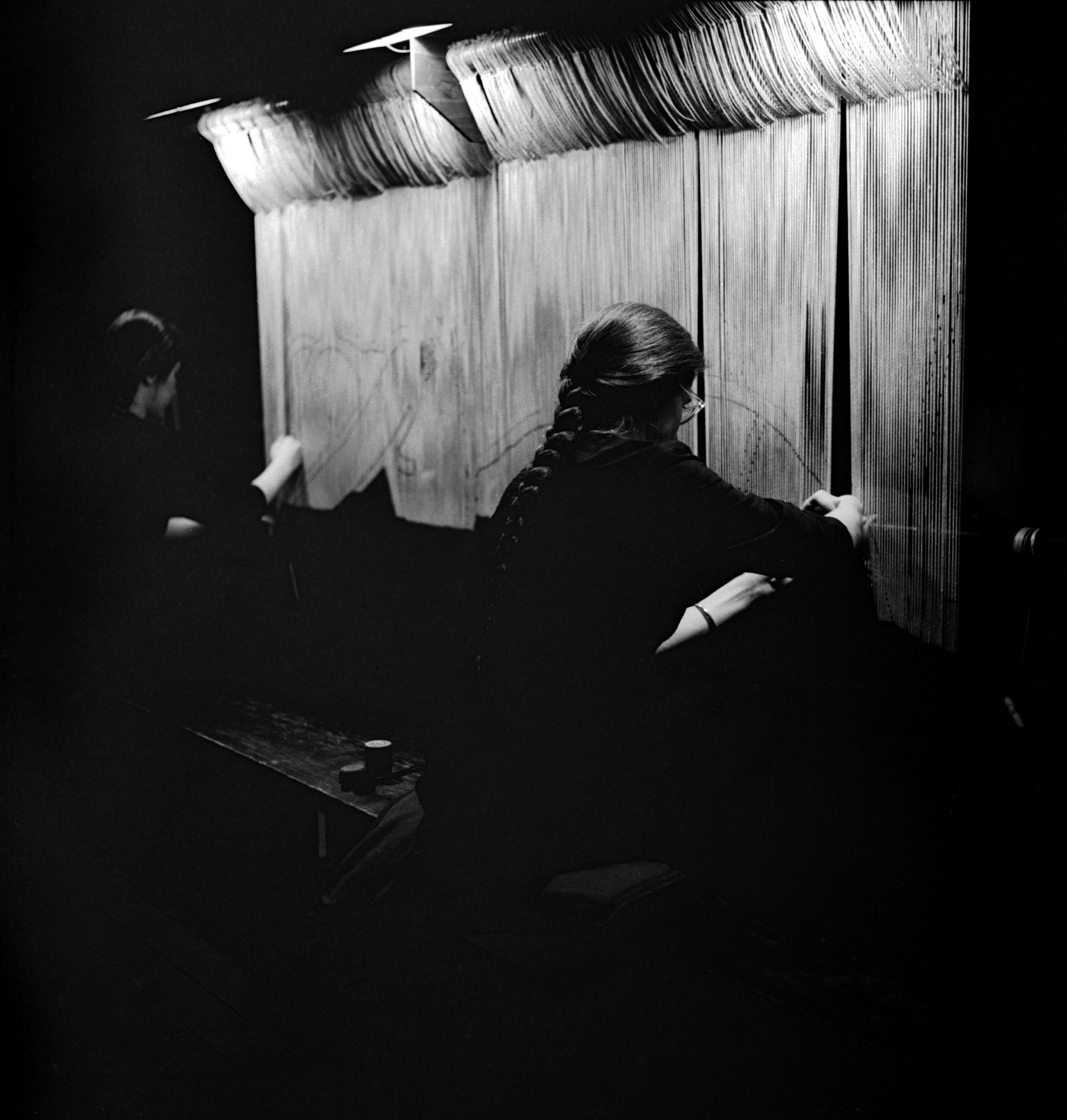 1951. Annabert and Marianne weaving in their 96 Fifth Avenue studio 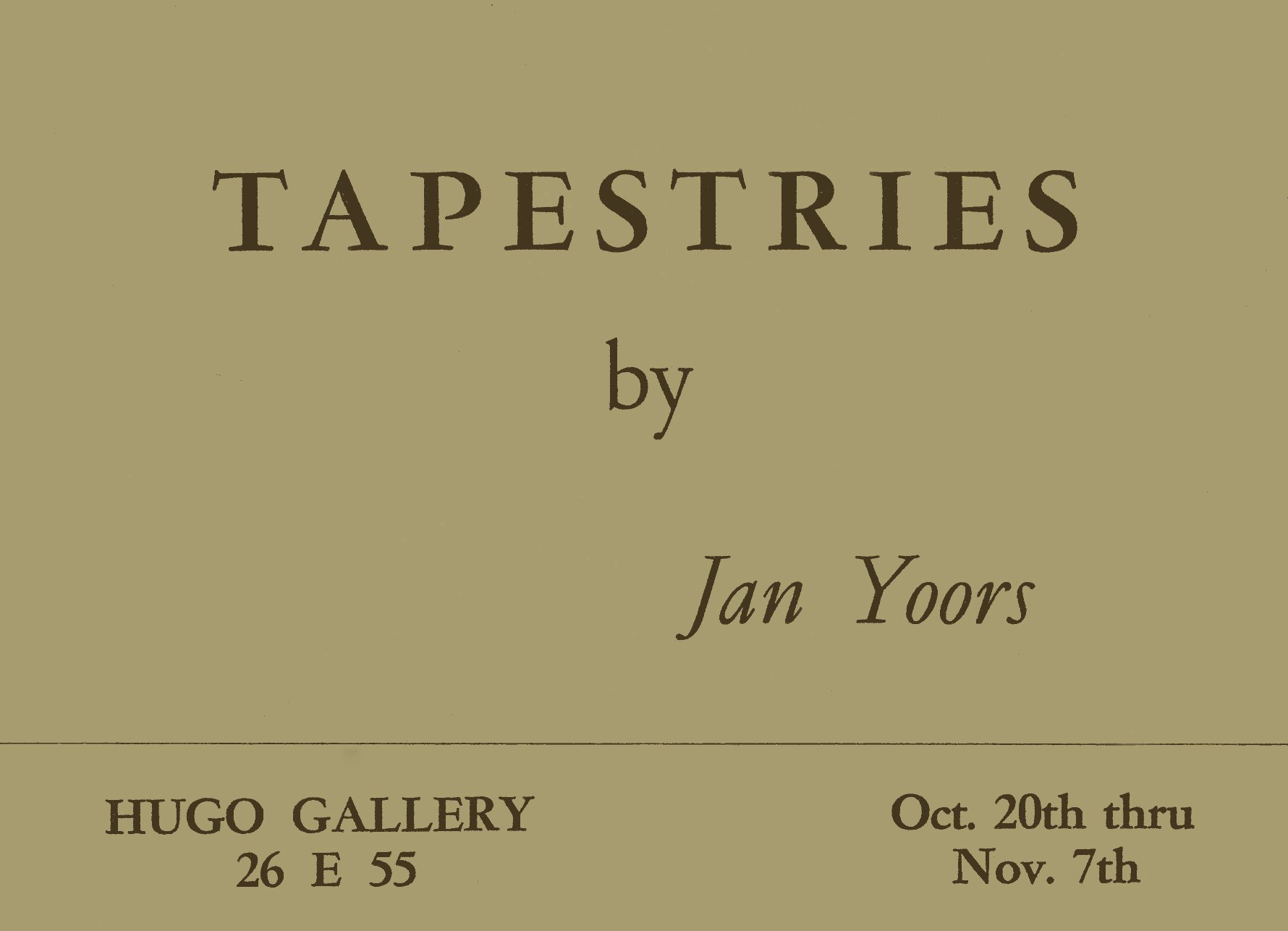 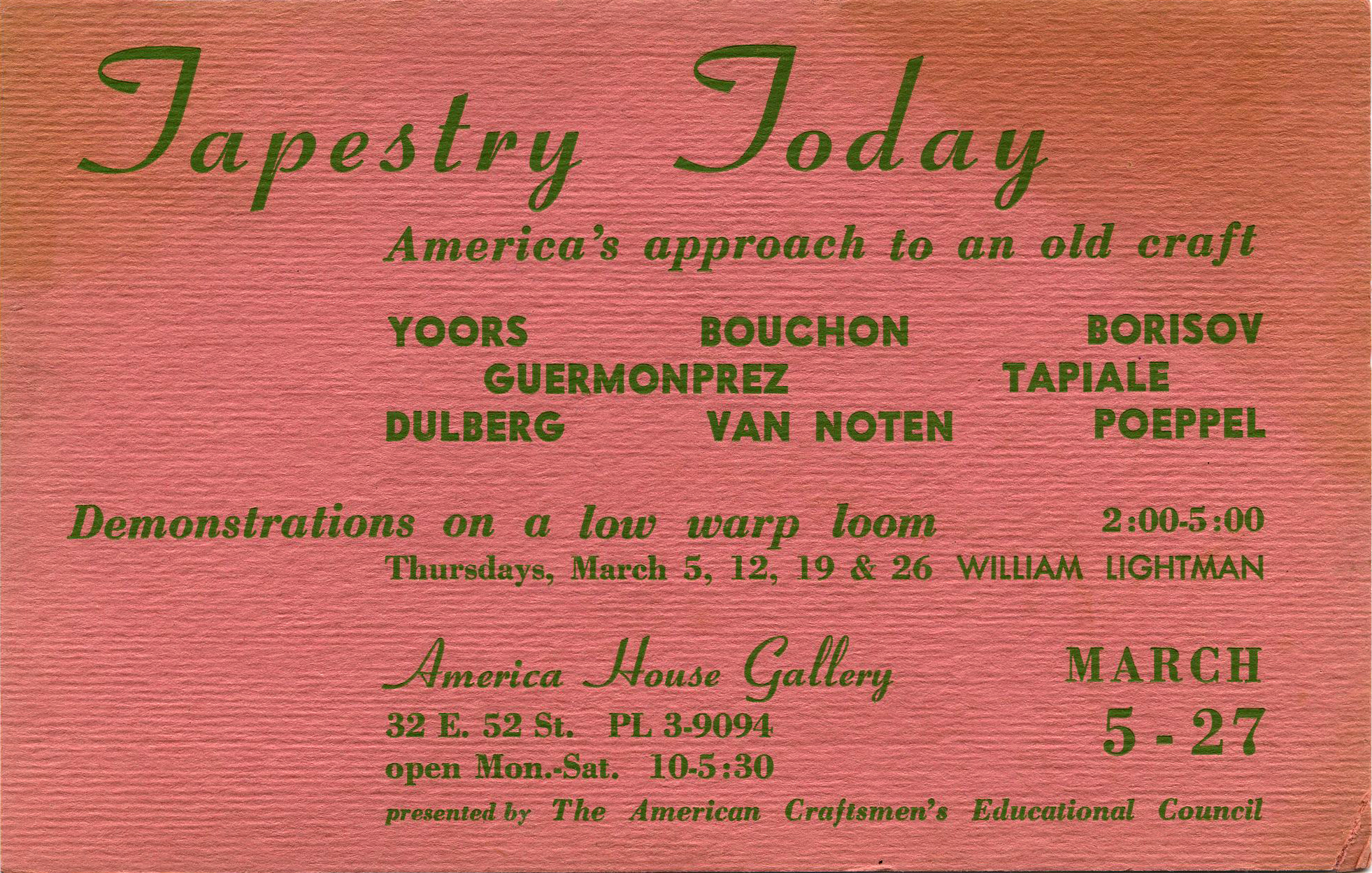 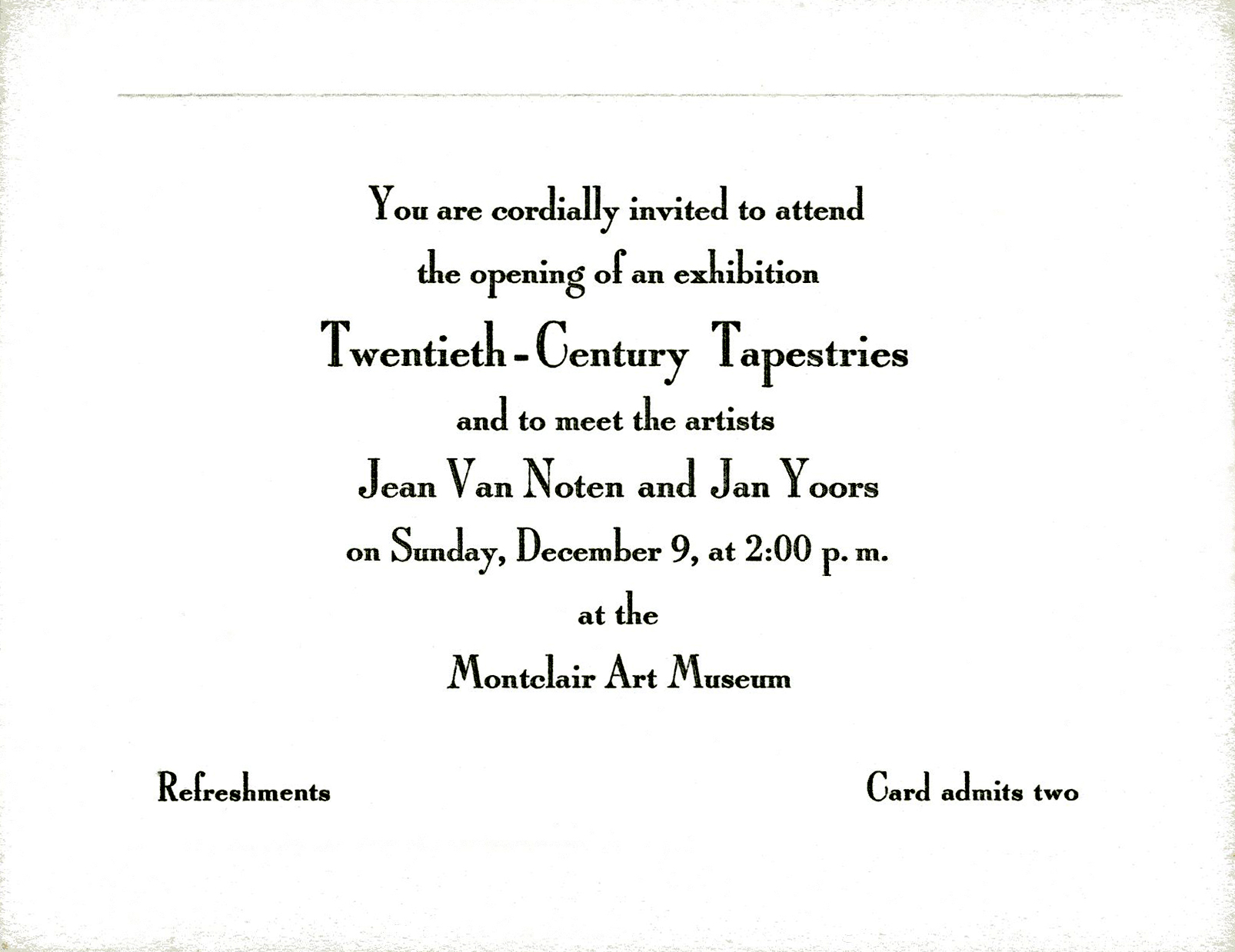 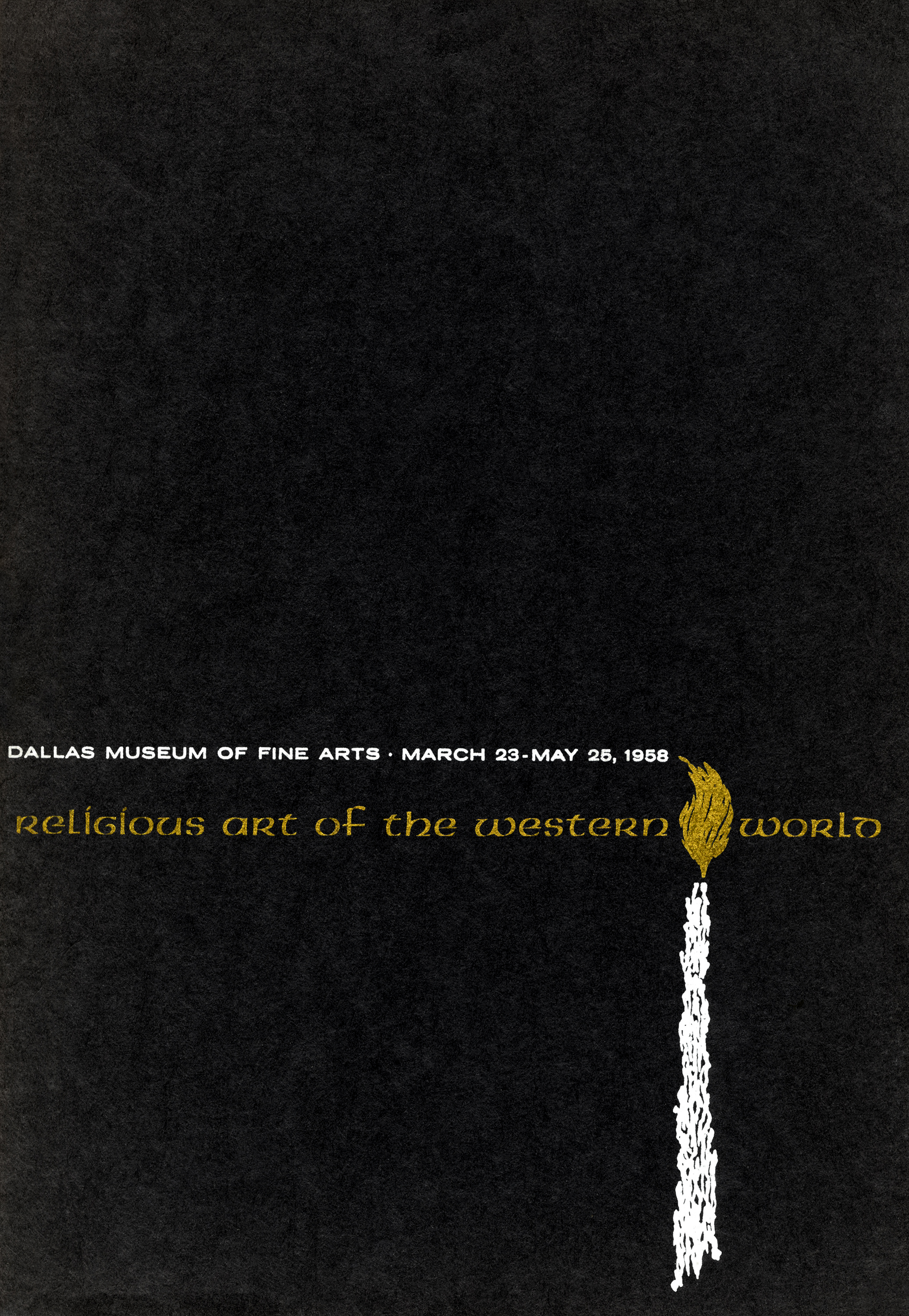 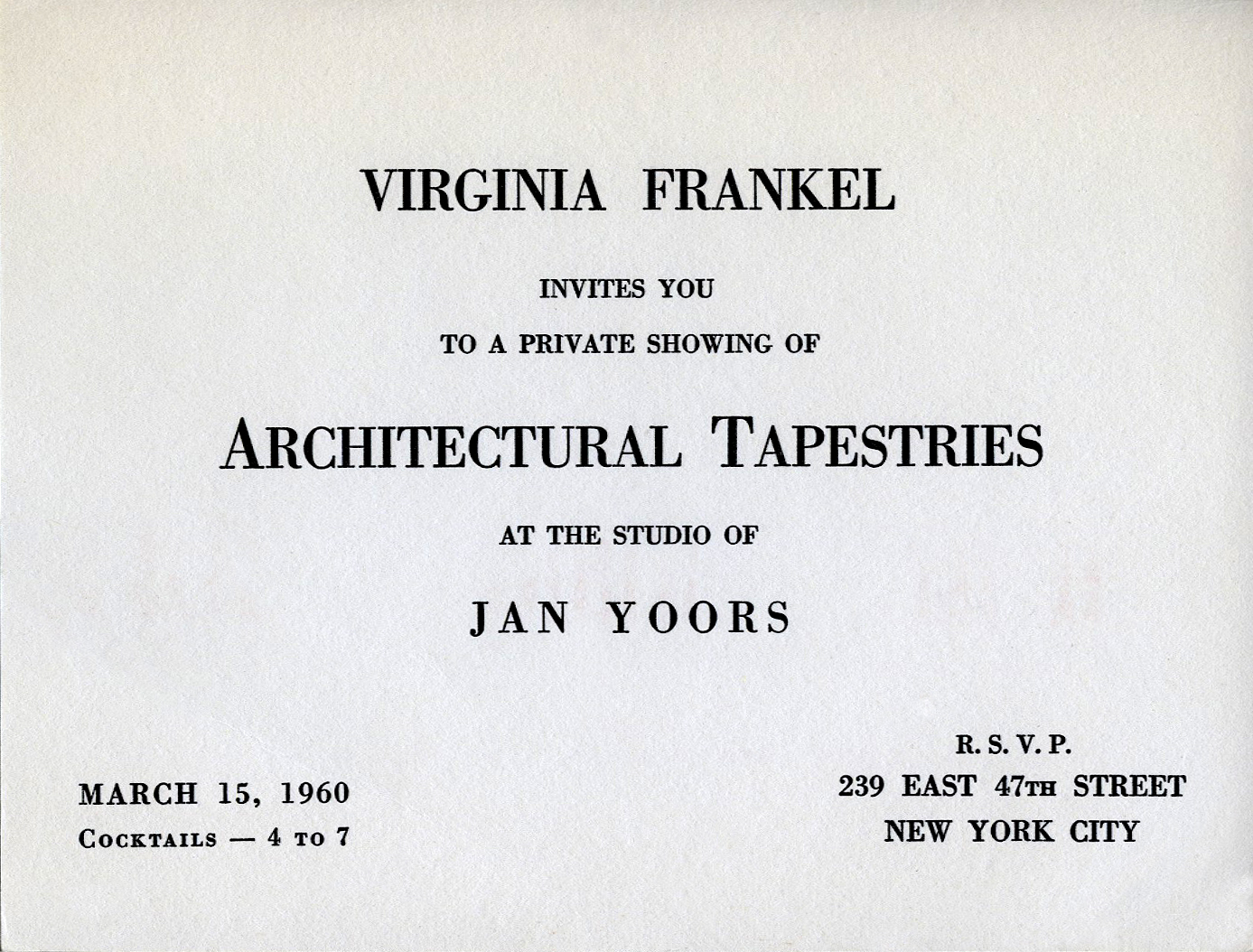 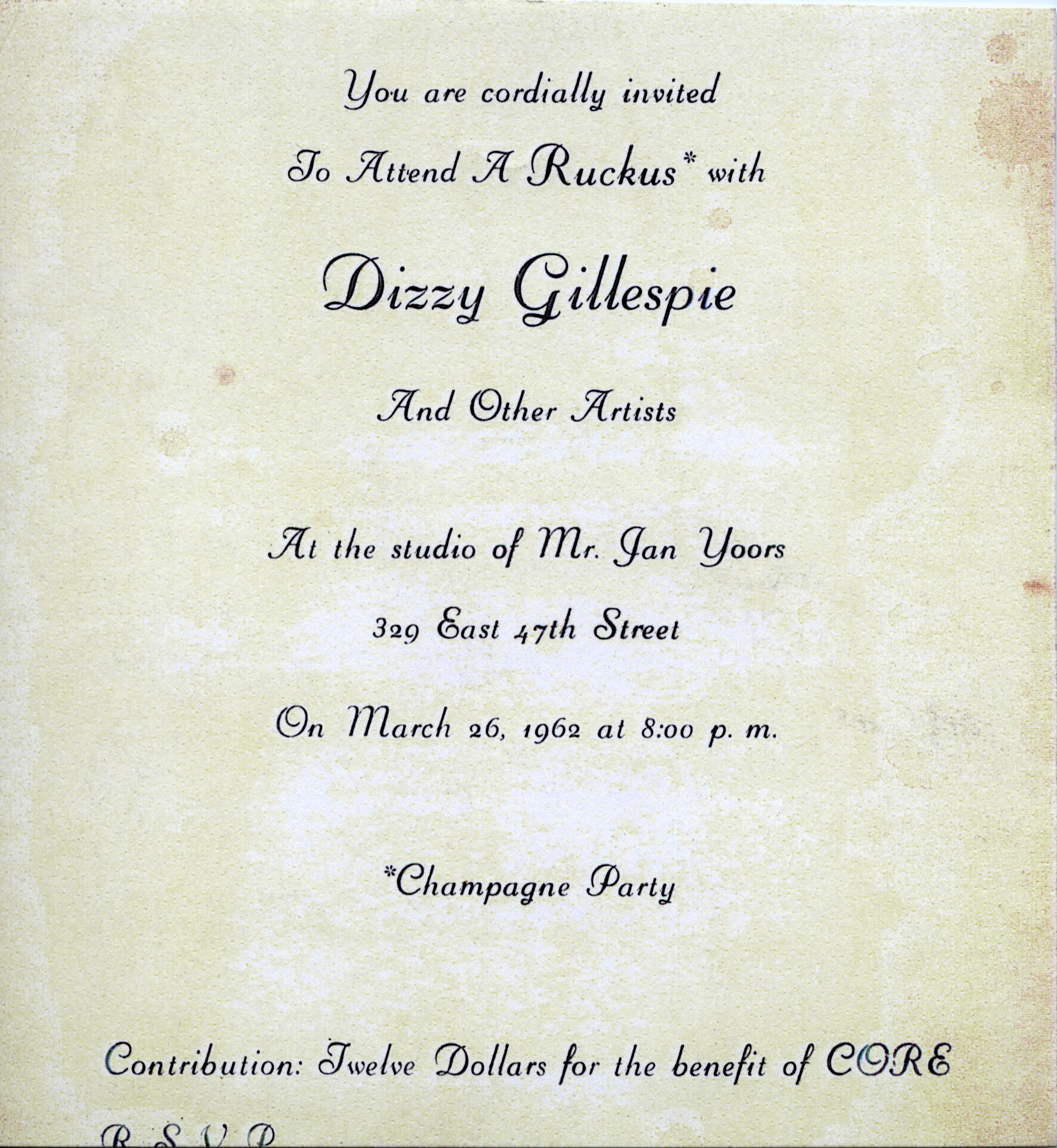 1962. Benefit Invitation to hear Dizzy Gillespie and other artists

1967. Review of the Gypsies by Margaret Mead 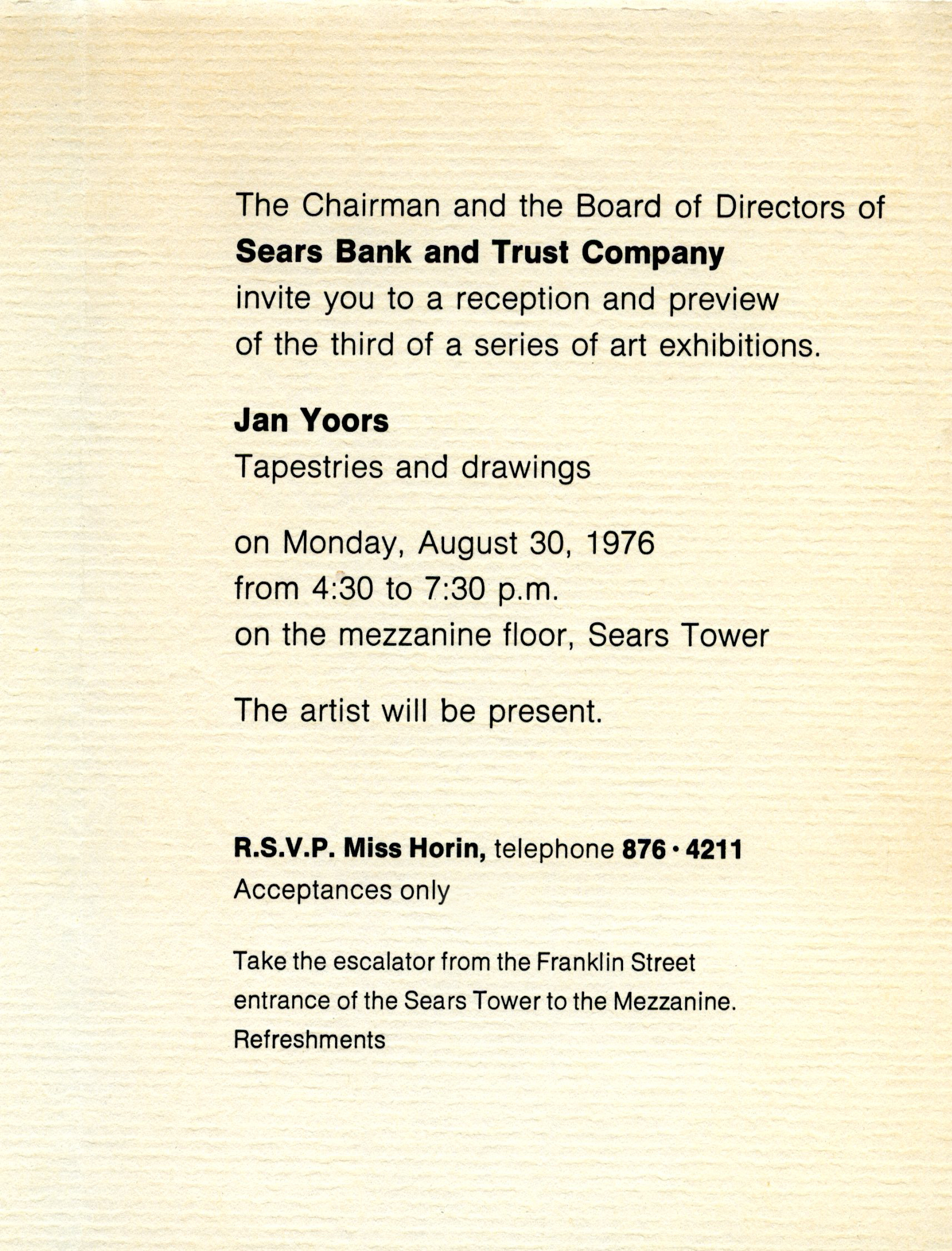 1976. Invitation to Jan’s show at the Sears Tower 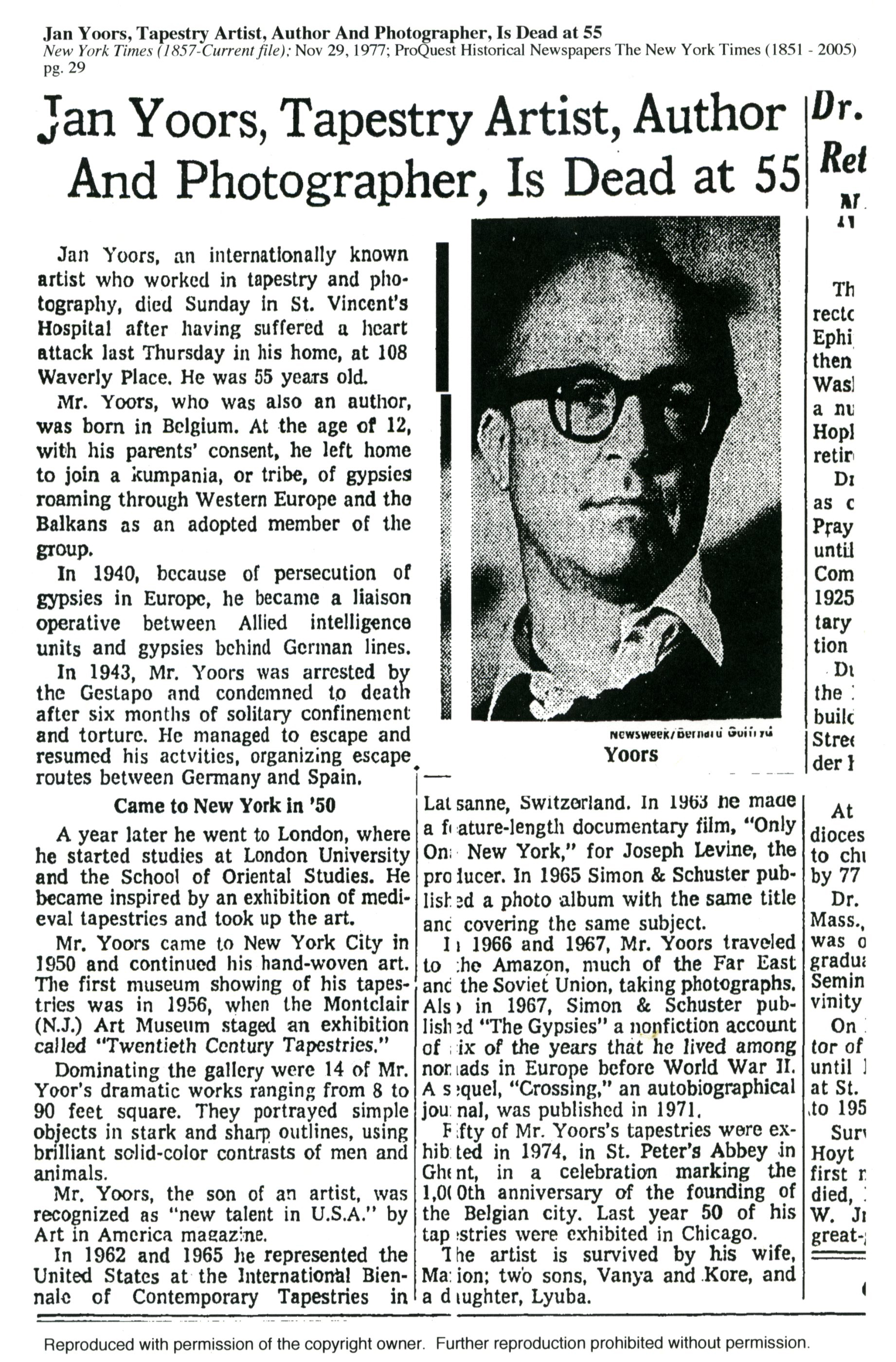