Yoors grew up spending many hours in his father Eugeen’s studio at 24 Troyentenhof, Antwerp. While Eugeen was drafting full-scale designs of religious tableaux for stained glass windows, Yoors contented himself quietly painting and drawing on scraps of his father’s paper. Eugeen also would tell Yoors stories of heroes, and of the noble Romani Gypsies, whom Eugeen knew as a child growing up in Spain. It was while living in Antwerp that Yoors first encountered the Gypsies and met Annebert van Wettum, the girl who would become his wife after the war. Yoors also had his own small studio in the yard behind his parents house where he created his own work during his years an an art student. 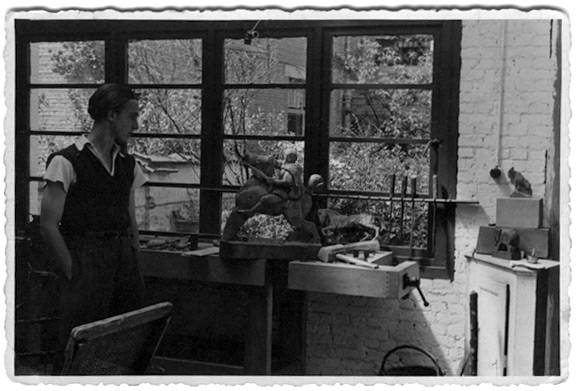 Jan in the backyard studio.