Animals and the natural world were one of Yoors’ fascinations brilliantly depicted in the series of animal gouaches. They were produced during the same short period as the biblical gouaches. Similar versions of these animals also appear on the peripheries of biblical and mythical compositions and in his figurative tapestries such as the Fishermen tapestry. Composed of fantastical colors, these playful creatures, which include varieties of birds, fish, insects, and small land animals, sometimes appear alongside an element of their natural habitat, often against richly colored backgrounds. Two examples of this are a Rabbit sitting beside two carrots still rooted in the ground and an earwig positioned on a leaf, which also provides a sense of scale.

As with the biblical gouaches, some of these were also woven as tapestries. While living in London, Yoors frequented the natural history museum and zoo where he studied some of these animals. He also produced gouaches of the same animals with different color schemes, as well as pencil sketches of compositions, such as can be seen in the example of the earwig, for which he produced both a fully painted gouache and pencil sketch. 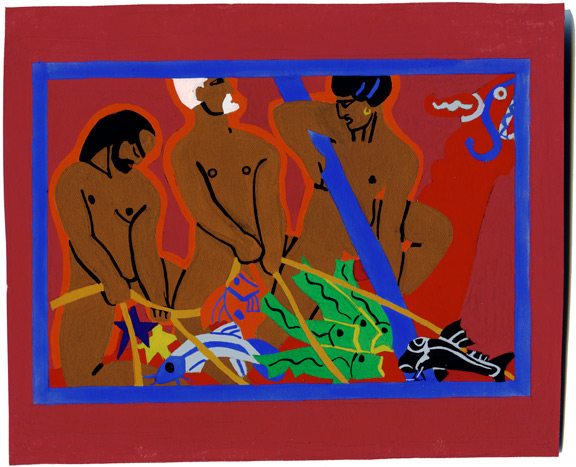