Although the animal and biblical gouaches form a small part of Yoors’ oeuvre, he did continue working in gouache throughout his life. Specifically, toward the end of this career as his health was failing he produced these as a way to make designs for large, abstract tapestries. These works in particular are interesting for what they reveal about Yoors’s later design process, as many of the designs originally executed as gouaches were originally inspired by Yoors’s work in photography. Before Yoors health began to decline, he always designed full-scale tapestry cartoons. Although many of the gouaches can be considered preparatory works, they are nevertheless complete works unto themselves. In many cases gouaches are the only evidence of tapestries that have been lost or were never woven into full-scale tapestries. Gouache painting was a way for Yoors to work out the color scheme for a tapestry design, which he would then pair with the appropriate strands of wool. Yoors also made gouaches as preparatory work for projects in other media, such as a proposal for a series of mosaics depicting night and day commissioned by New York architect Abraham Geller an office context. 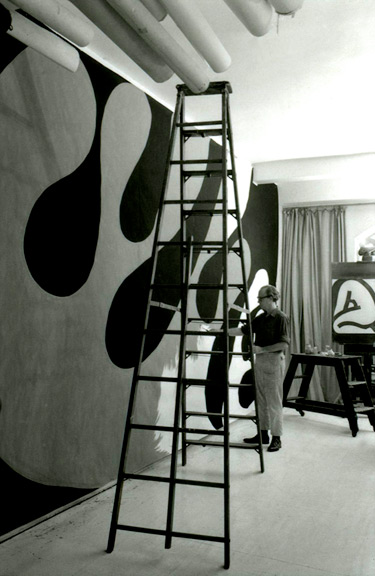 Jan painting the full size cartoon for “Red and Black Shapes”. Tapestry woven in 1970 – 12’ x 24’.
In the Art Collection of JP Morgan Chase.