The biblical gouaches Yoors produced in two sets, the first and larger set followed by a smaller set more fit for travel. He began the series while still living in Belgium in the 1940s. Some of these designs Yoors would later transform into a series of small tapestries. This series, as with much of Yoors’ work, is two-dimensional and stylized, illustrating biblical stories, usually consisting of a central, strong-bodied and wide-eyed figures rendered in profile on a flat, brightly colored background. While the images are figural, the similar bold colors and flat surfaces and shapes also appear later in Yoors’s abstract work. In these compositions, the figures, usually brown- or yellow-skinned with black or gold hair, take up the majority of the picture plane. In a gouache of St. Francis, one of Yoors’s preferred saints from his childhood, a robed and bearded Francis appears kneeling before fish emerging from the water as if listening to the saint’s words. Similarly rendered fish also appear as subjects in Yoors animal gouaches.

While the Bible proved a rich resource for Yoors, he was equally interested in and produced a number of gouaches based on Greek mythology, in particular stories from Ovid’s Metamorphosis. In Apollo and Daphne, a golden Daphne, her torso visible in the background, sprouts laurel tree branches while a darker-skinned Apollo runs to embrace her. This gouache is also an example of the manifestation of nature in Yoors’s work, as the branches growing from Daphne’s body are stylized representations of branches and leaves. Such imagery can be compared to Yoors’s later works, particularly gouaches and tapestries that represent trees and the natural environment in a metaphorical, abstract, and even ambiguous way.

A 1949 exhibition at a gallery in Brussels featured 46 gouaches, both biblical and from Greek myth, along with the tapestry Knight of Nadara. Yoors choice of skin colors in this series reflects his interest in the world’s many cultures and ethnicities. The diversity of his figures is prevalent throughout his work across disciplines. Particularly, continuity with the charcoal drawings exists in the thickly outlined figures as in the charcoal drawings. Similarly, the same bright gem-like, color Yoors painted in blocks of color was influenced by his experience living with the Roma but also goes back to his childhood spent immersed in his father’s stained glass making. 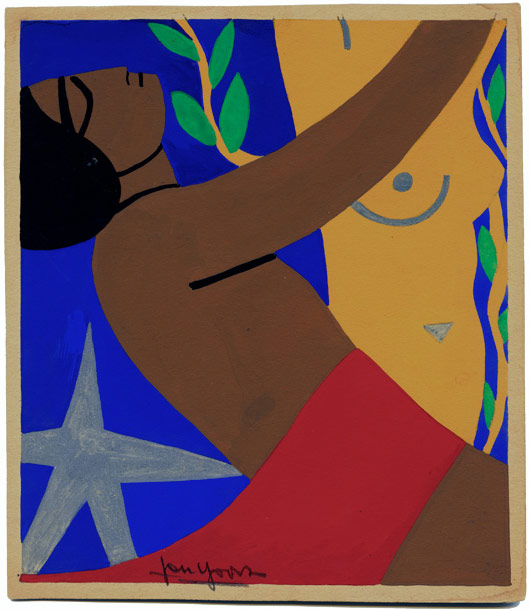