In 1951 the Yoorses set up a studio at 96 Fifth Avenue in New York City. Jan constructed a fifteen-foot vertical wooden loom, which enabled Annebert and Mrianne to weave two tapestries at the same time or one large tapestry together. Yoors would create full-scale cartoons on paper that would be translated to the warp threads on the loom. It was while working here that Jan received his first 35mm camera, and his photographic work was able to expand and continue. He enjoyed studio visits from Henri Cartier-Bresson and Edward Steichen, among many other artists.

The fifties were a very exciting time for Yoors as word got out about his work. As a celebrated émigré with an exiciting wartime story, he maintained a steady connection with the Belgian and French delegations, which probably led to an installation of “The Stampede” at the United Nations in the early 1960’s. Many visitors found their way to his studio, including Alexander Calder, Marc Chagall, and the photographer Philippe Halsman in 1954, and architects Frank Lloyd Wright and Philip Johnson about 1956. Guggenheim director James Johnson Sweeney became a visitor in the late 1950’s and purchased a drawing from the artist.

In 1952, his illustrations were included in a book by Clare Boothe Luce, a convert to Catholicism, entitled “Saints for Now”; Yoors’ involvement may have come about because of his participation in an exhibition of liturgical art in London. 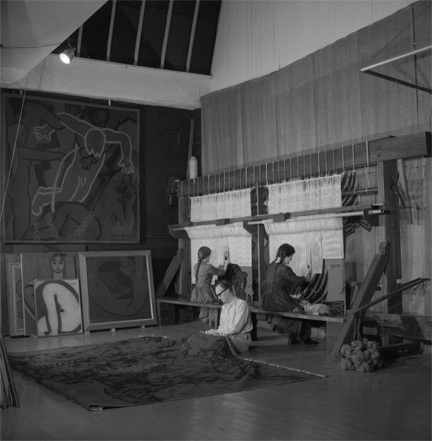 Jan, Marianne and Annebert working together. Jan is hemming the tapestry.